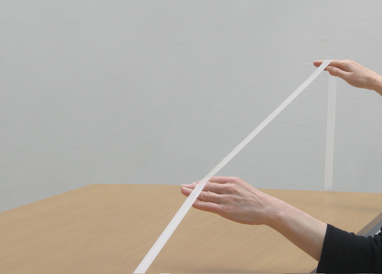 A duo for two soli. Marie Cool and Fabio Balducci have accepted a joint invitation from 49 Nord 6 Est – Frac Lorraine and the Synagogue de Delme Contemporary Art Centre. This autumn, they will present complementary experiments that thwart the laws of physics.
The two exhibitions in Metz and Delme (drawings, installations, videos and actions) combine to form an echo chamber with an essential, existential approach, where continually repeated moments touch upon the ineffable.
The pieces created by Marie Cool and Fabio Balducci have a layout and spatial presence that give their appearance the semblance of “unstable sculptures with body”. The peculiarity of their propositions and barely installed installations have a genuinely powerful strangeness.
These artists are ultimately aiming to give rise to thought rather than to a result. They attempt to break up the conflict of the material and the metaphysical. Following no track or trail, Marie Cool and Fabio Balducci are offering nothing less a renewal of the art experience. Using humble materials, simple gestures, a subtle temporality, they are reviving a universal language that everyone can understand.

They display a sensitive, critical rigour that enables them to engage in a questioning of certain behaviours, postures and normative values – particularly temporality – that no longer seems able to exist in the ordinary context of institutional spaces.
All of their internal dialogues, visions, incisions and apostrophes speak of a passionate desire to dig into representation in order to help make it more open. All of their work predisposes one to that impetus which makes art the most effective means of bringing the invisible, inaudible world into existence.
In Marie Cool’s gestures, the hand becomes a life in itself, a multifaceted face, liable to caress or shatter. It is the site of an approaching rage, an evolving revolt, a human resistance to the dilution of a consumed, consumable world, governed by objects and all-powerful machines.
The insurrection that the gestures contain becomes its own politics of life, a constant injunction to stay awake, alive, to be there but always in a precarious balance, at the edge of a secret.

Marie Cool was born in Valenciennes in 1961 and Fabio Balducci was born in Ostra (Ancona, Italy) in 1964. They live and work between Paris and Pergola (Marche, Italy). They are represented by Marcelle Alix Gallery, Paris.

Free guided tour
Every weekend at 5 PM (in French).
Tours are available in English, Italian, and German upon request.

GB /Video – Performance 12: On Line/Marie Cool and Fabio Balducci Jan 17–20, 2011
In conjunction with the exhibition On Line: Drawing Through the Twentieth Century
© 2011 The Museum of Modern Art, New York