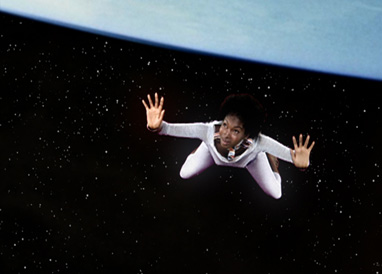 «Standstill (The Earth turns without me)», videostill, 2010 © ProLitteris

When imagination is harnessed in the service of science, the real, the possible, and the probable become blurred. When science meets fiction, it is imagination that takes the reins…

The International Science Fiction Festival, which turned Metz into a world hub of SF between 1976 and 1986, and which for many is still a vivid memory, is the subject of a survey conducted by art critic Hélène Meisel.

As a counterpoint, the exhibition Peripheral Vision by Swiss artist Christian Waldvogel tackles scientific riddles in order to playfully subvert concepts in astronomy and offer clues to understanding the Universe.

What if the West Pole were real?
What if one could momentarily escape the Earth’s rotation?
What if the mystery of the mythical planet Antichthon were about to be solved?
What if the human species were to construct a new planet Earth from the old one, a gigantic structure capable of satisfying all our material and spiritual needs?

For the first major exhibition devoted to Christian Waldvogel by a French cultural institution, the artist will guide the visitor through five extensive projects completed between 2004 and 2013.

From scientific riddles to astronomical hypotheses, from cosmic mysteries to metaphysical doubts, he questions the world in which we live and which we think we know, by offering us clues to understanding the Universe. Although we know for a fact that the Earth is not the center of the Universe and that humans are but a species among many, we continue to behave as if everything revolved around us.

Understanding the world the way it is and not the way we want to see it: this is the quest of the artist and of those who wish to become global citizens. Peripheral Vision thus undertakes to dislocate our observation post from the Earth to the Outer Space, and to privilege the vision of what normally remains within the realm of fleeting impressions. This is a plunge into the real, the true, the possible, the probable…

Christian Waldvogel was born in Austin (US) in 1971. He lives and works in Zurich (CH). For his art projects, which bridge science and the arts, he frequently collaborates with professionals like mathematicians, architects, microbiologists, astronauts, pilots and physicists.
In 2004, he represented Switzerland at the 9th Venice Architecure Biennale and received the Gold medal “Best designed books from all over the world” for Globus Cassus edited on this occasion.
In 2011, his monograph Earth Extremes received the Bronze medal in the same competition. His work has been shown in lectures and exhibitions worldwide. He acts as a Co-chair in the European Space Agency’s Topical Team Arts & Science (ETTAS).
He is represented by Herrmann Germann Contemporary, Zurich.

For a decade, Metz became the world hub of SF. Between 1976 and 1986, Metz was, in fact, the setting of a Festival whose bold programming generated unexpected encounters and incredible experiences. International in scope, the event was, in the first place, a literary gathering, offering Anglo-Saxon and French authors a more unusual destination than the high masses normally reserved for the initiated.
This eclectic Festival insisted from the start on transdisciplinary, viral programming, touching the audience beyond book signings, screening rooms, concerts, or exhibitions.
How to tell this story which placed Metz at the heart of the realm of SF? The surprising results of the survey conducted by Hélène Meisel in collaboration with ESAL-Metz and the Bibliothèques-Médiathèques de Metz, give an overview of the immense cartography of SF which abounds with parallel worlds…

Born in 1986, Hélène Meisel lives in Metz. Art critic and historian of art, she was part of the 2011–2012 residency at the Pavillon of the Palais de Tokyo. She is a regular contributor to the magazine 20/27 (published by M19) and Volume: A Contemporary Journal about Sound.

Appropriating the eye-catching, colourful imagery of the rare French sci-fi magazines and comic book covers of the 1960s, Jean-Jacques Dumont’s “modified mags” are a nod toward the collective Western imagination of the collector. But the characters, which literally put down their roots in these mags, brandish wilfully enigmatic injunctions that playfully disrupt the naïveté of the original message.

Born in Vire, France, the year Philip K. Dick’s The World Jones Made was published, Jean-Jacques Dumont is an artist working in the East of France. He elaborates projects which challenge systems of representation and communication through the use of hybrid techniques, from publishing to multiform technologies.

Like a kind of library of Babel, the work created by Claire Morel is made up hundreds of printed dedications taken out from various books where they were placed by their authors. Are they part of the work or merely an annex? Does their value reside in what they say or in the trace of the author’s real presence? This unique and potentially infinite collection suggests the magnitude and the diversity of the genre which, lauded or disparaged, rarely meets with indifference.

Born in 1980, Claire Morel lives and works in Mulhouse. Her career as an artist revolves around writing as a field for experimentation. The book is a space, an architecture, a surface occupied, transformed, and animated by writing or its absence.

With the support of Pro Helvetia
And Matthew Reiter Collection, Zurich