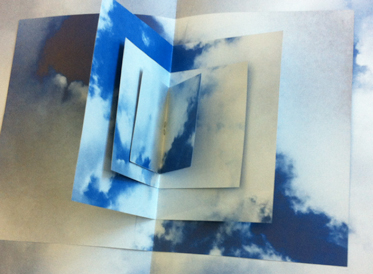 A book.
The cover: a fragment of a blue sky, some clouds.
No title, not a word.
One opens the book. For sure, there is always the sky and the clouds, but inside, one finds another, smaller book. And so on and so forth, until the middle where one discovers the true nature of the object: a mise-en-abime of books and nesting of the rectangles of the sky.

Abyss… The title of this booklet designed by Anne-Émilie Philippe isn’t random. Besides its evidence in the shape of the object, the term has a deeper, more imaginative meaning. Anne-Émilie Philippe plays with the word, with the editorial object, and with its manipulation by the reader/viewer.
Reading tends to be a solitary activity, but the image presented offers us a window on the immensity of the sky, the locus of dreams. The artist makes us leave the book even while she supports the propensity of reading to capture one’s imagination.
The abyss into which the book plunges us is inverted. We look up. The whole object plays with such inversions. If one thinks that making the page smaller goes hand in hand with reducing the printed image, one is surprised to discover that all the pages in this book are but one and the same image. In fact, a single photograph of the sky was printed in the A2 format, cut in half to form the cover, and the remaining half is itself halved to form the first set of pages (signature), and so on. Out of this simple, yet vertiginous process, two new movements ensue. Through the sequentiality inherent in the book — one page after another — the artist emphasizes the temporal aspect not just of the gesture of photography but also of the act of contemplation. She gives several moments to a single image. But by dividing it, she also invites us to enter deeper into the image, as if it were a thing that is measured once the central signature is open, when all the rectangles of the sky have been superimposed. The object thus becomes shaded with a quasi-cinematographic tone: a faux zoom / tracking shot in the image, everything done at the rhythm of quite radical cuts, but only to allow us to dream better.