Opening : June 27th at 19h, in the presence of the artist 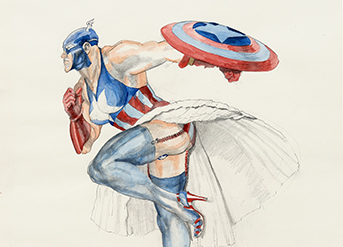 Margaret Harrison is an influential figure in the feminist art movement in the UK in the 1970s. Over the past fifty years, she has developed a body of thought focusing on the issues of gender, class, and more generally the place of women in society. In Harrison’s first major exhibition in France, 49 Nord 6 Est – FRAC Lorraine highlights the diversity of her practice, which includes installations, paintings, drawings, collages, and writing. The work of this artist and activist challenges the visual canons and codes underlying the representation of women in society, as well as women’s self-perception.
-
Her drawings of the Superman sporting stilettos and her portrait of Hugh Hefner, the founder of Playboy, as Bunny Boy, led to the police shutting down her first exhibition in London in 1971. In parallel, Harrison has engaged in reflection, spanning her whole career, on labor conditions of the working classes. Attentive to economic and social developments in rural UK and United States, from the rise of Manchester and Liverpool in the late nineteenth century to the industrial crisis of the 1970s, which affected England as well as California, Margaret Harrison has produced an extensive body of work based on sociological surveys. She also examines Western cultural icons, exposing their normative potential and the power relationships they both replicate and perpetuate. Long available only to limited audiences, her work is now beginning to enjoy wider recognition and renewed relevance in the context of current debates on gender and sexual identity. Harrison encourages us to go beyond binary approaches to race or sex.

June 27th, in the presence of the artist
Free access