A serpentine gesture and other prophecies 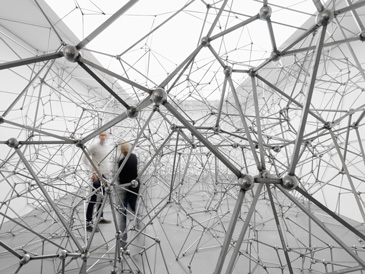 The Timeline commonly governs our concept of History…with a beginning and an end! But what if its implacable logic is nothing but an illusion? Linear Time, circular Time, reversible Time are all different ways of thinking of and dreaming the world and of putting an end to apocalyptic visions!
-
-
Natural disasters and intensive human activity converge to bring about the end of the world, as foretold, time and time again, jointly by the media and the scientific community. It is no longer the death of our sun, expected to take place billions of years from now, which looms on the horizon, but a quicker apocalypse which has already been envisioned in detail by Hollywood. The next rendezvous, December 21, 2012: the Maya calendar will come to an end as will our world… However, if it could be postponed until 2017, and if we give credit to the rumor spread over the internet, perhaps we will be lucky enough to get transported to Mars by means of a magnetic field and thus escape the anticipated collision between Earth and another planet (P. Phinthong).

World history could be summed up as a simple timeline marked by a succession of key events. This line circumscribes, and nearly has mastery over, the temporality of the world: its origin and its disappearance logically bind the two extremes. The horizon of a shipwreck is here diffracted in silence (I. Bonillas) and calls for the lessons of darkness (W. Herzog): an awe-inspiring tragedy of a world devastated by the fires of the apocalypse.
Starting from the observation of nature, transmitted by religions, or described by physical sciences, the circle, the spiral, and the curve offer other models for conceiving temporality. They inspire alternative hypotheses and conjure up other images: the infinitesimal and the infinitely large may come together in cosmological time (B. Billotte).
A solar eclipse becomes a mystical aureole (C. McCorkle); before a fallen star, Sisyphus tirelessly repeats his absurd existential chore (P.-E. Morelle). And when time becomes the fourth dimension, we follow the flow in order to be swept up into a recursive whirlwind (M. Grzymala) or to become one with the universe (A. Gormley). What does time consist of, then (I. Wilson)?
Crossing physical, historical, biological, and mythological time, the artists project us into a dream time.

Group visits in English on request: