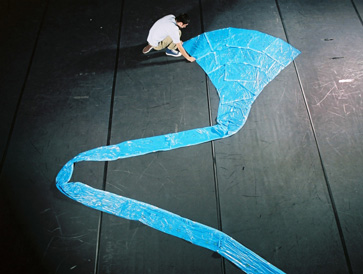 Newspaper, trash bins, masking tape… are among everyday materials a priori devoid of poetry. Manipulated with simplicity by Tiago Guedes, however, they metamorphose little by little into multiple worlds…
Tirelessly reconfiguring the elements, the choreographer creates a landscape that comes to breathe and unfolds in poetic metaphors.
Astonished, we discover with each instant the way everything is constructed and invented, step by step…

Tiago Guedes was born in 1978 in Portugal. He studied music for 10 years at the Regional Conservatory in Tomar before enrolling in a dance program at the Higher School of Dance in Lisbon, Portugal. He continues his education through various internships in theatre and contemporary dance.
As a performer, he has worked regularly with various Portuguese artists, including Miguel Pereira, Aldara Bizarro, Francisco Camacho, João Fiadeiro, and André Murraças. He made his choreographic debut in 2002 with Um Solo (A Solo) featured among the Encontros Imediatos at the Festival Danças Na Cidade in Lisbon. The performance received the audience choice award and won the first prize at the competition of Young Creators at the Biennial of Young Artists from Europe and the Mediterranean (BJCEM). Um Espectáculo com Estreia Marcada (A Spectacle with a scheduled premiere) inaugurated the program “Box Nova” at the Centro Cultural in Belém.
In 2003, he created the solo performance Materiais Diversos (Various Materials) which was produced by RE.AL (Lisbon) and co-produced by Le Vivat/Lille 2004 – European Cultural Capital and the Theatre House Chão de Oliva (Sintra, Portugal). With this play he again won the competition of Young Creators organized by the Clube Português de Artes e Ideias in 2004.
In 2005, he created Trio at Vivat (Armentières, France)—a play co-produced by Le Vivat, Culturgest (Lisbon), and the Festival des Arts Vivants in Nyon, Switzerland; in 2006, Trio Multiplié (Trop Multiplied), a recreation of Trio for 15 amateur actors, at the Camões Theatre (Lisbon); in 2007, Matrioska, a play for young audiences, at Vivat; and Opera, a duet in collaboration with the Portuguese actress Maria Duarte, based on Purcell’s Dido and Aeneas, at the ZDB Gallery (Lisbon); and in 2008, Coisas Maravilhosas, at Vivat.
His work has been frequently featured in theatres and festivals in Portugal, Spain, Belgium, Great Britain, Hungary, Switzerland, France, Germany, Italy, Greece, Slovenia, Austria, Netherlands, and Brazil.

As a choreographer, Tiago Guedes was associated with RE.AL between 2003 and 2007.
Between 2006 and 2008, he was an artist in residence at Vivat.
In 2007, he created his own structure, Materiais Diversos, which has been incorporated into the ZDB Gallery in Lisbon.

“To see a thing we must adjust our visual apparatus in a certain way. If the adjustment is inadequate the thing is seen indistinctly or not at all. Take a garden seen through a window. Looking at the garden we adjust our eyes in such a way that the ray of vision travels through the pane without delay and rests on the shrubs and flowers. Since we are focusing on the garden and our ray of vision is directed toward it, we do not see the window but look clear through it. The purer the glass, the less we see it. But we can also deliberately disregard the garden and, withdrawing the ray of vision, detain it at the window. We then lose the sight of the garden; what we still behold of it is a confused mass of color which appears pasted to the pane. Hence to see the garden and to see the window pane are two incompatible operations which exclude one another because they require different adjustments. ”
José Ortega y Gasset, The Dehumanization of Art and Notes on the Novel. Trans. Helene Weyl. Princeton, NJ: Princeton University Press, 1948. p. 10.

“By pursuing my work with visual materials and with the relation between performer and function and by trying to distance myself more each time from a choreographic show, an unexpected choreographic proximity is revealed…
From what source, and in what form, can one still extract some choreography?
How, on the basis of a musical score involving various materials, can one reinvent this score and transform it into something as abstract as possible?
How do those various (choreographic and visual) materials influence one another, intermix, and establish correspondences among themselves?”
Tiago Guedes