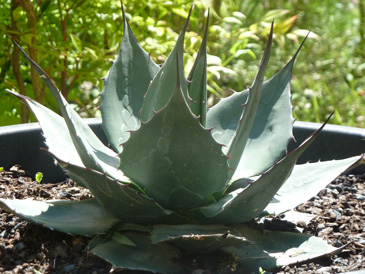 If we are often moved by the beauty of plants, it would be dangerous to stop at their aesthetic qualities. Plants develop very elaborate, even insidious, defense strategies aimed at fighting off the hordes of predators which can include parasitic plants and mushrooms, insects and herbivores, not to mention humans who are also part of this long chain.

In order to fend off outside attacks, plants have developed a whole arsenal of defenses: the cactus has thorns; holly, trifoliate orange, and thistles have spiny leaves or branches; some plants, such as the agave, have extremely resistant leaves. Plants also deploy the most subtle methods: the tips of the yucca are equipped with dissuasive barbs, while mint excretes an odor which repels herbivores.
Other plants attack in the face of danger, like nettles and dendrocnide moroide (stinger, native mainly to Australia) which possess urticants of different degrees of intensity. Stinger produces a powerful neurotoxin capable of killing animals like dogs or horses, but very rarely humans.
Some plants affect the behavior of their predators: the Coffea plant, for example, is an excitant, whereas the poppy has a calming effect thanks to morphine it excretes. Yet other plants produce poisons which, when ingested, may make their predators sick, or even kill them. Ground castor seeds are a deadly poison for humans (ricin).

Contrary to the current trend extolling the beauty of nature and its benefits, Liliana Motta proposes a garden in which one should beware of the plants!

Liliana Motta : Artist-botanist of Argentine nationality, she is interested in “weeds.” While reporting on their subjective and ideological classification, she challenges the notions of national territory and protectionism. She is the author of a collection of Polygonum, registered as a “National collection” by the French Conservatory of Specialized Plants.

A workshop for kids
Every Sunday at 2:30PM
An exploration of the garden designed especially for your “bad little rascals”!
Free admission without reservation for children aged 6 to 12. Adults are welcome!