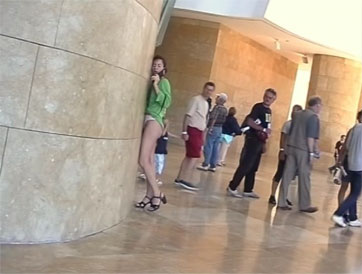 Touch deals with the situation visitors – versus spectators – are experiencing when encountering an artwork. The title underlines the obvious physical approach necessary within visual art when the exhibition itself rather invites the audience to reconsider the various levels of „touch“ available (sensual, virtual, conceptual, etc.) and how artists are considering them in their researches.
-
Works of the Frac Lorraine Collection:
Marina Abramovic, Rhythm 10, 1973–1993
Harun Farocki, Bilder der Welt und Inschrift des Krieges, 1988
Andrea Fraser, Little Frank and His Carp , 2001
Sigalit Landau, Barbed Hula, 2000
Teresa Margolles, El Baño, 2004
Fiona Tan, Downside Up, 2002
-

A man is a body and mind, a monkey and an angel. A man comes from monkeys, but head towards angels. While a monkey isdirty, hairy, stinks and shamelessly excretes and copulates, angel is a spiritual being. Angel is a son of god, but also a messenger, therefore the one, who making a journey – cognition – brings a message – the word – from god. Word is a reason and reason is mind, hence mind is a gift of god.

Word at first created light. Light allowed us to see. To see the world of monkeyssuch as being seen by angels. They aren’t eyes,who see, but mind. Word divided the world to world and the word world. Light had covered all enlighten with a non-permeable membrane dividing how the things really are, from how do we see them.

At first word created light, now light creates words. The only way how can “I” stay divided from body and world is to resist them. To be able to resist, the appealing has to become a word. The dividing membrane is permeable only in one direction. Thinking and thought “I” can only passively perceive. The viewed world is a hazy meadow in between dark forests seen from the outlook of a lonely hunter without a gun.

Human being is not a monkey nor an angel but flesh. A piece of meat activated by electric waves of desire. Nor human beings nor world are having a stabile essence but are simultaneously changing and lasting in time. This lasting and changing are both embedded in matter. Matter is memory. Memory is a scar.

Mind is an idea of body, which necessarily makes body be object of its mind. Emotions are analog and words digital. Important is not matter itself, but focus on this matter. We see for all the blind ones.