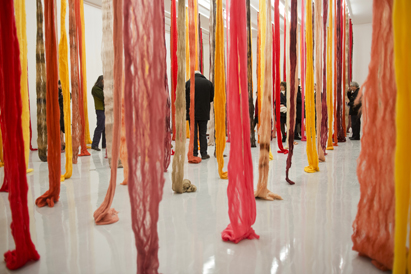 Nourished by the living memory of Andean, Native American, and Australian Aboriginal people, Agnes Denes, Monika Grzymala and Cecilia Vicuña, three artists of different generations and horizons invite you on a sensuous and poetic journey into the heart of political issues affecting our first-world societies.
-
« We are now pushing the earth to a very dangerous unsustainability, so it is time for us to hear the ancient voices in a new way. »
Cecilia Vicuña

Environmental movements, which emerged in the 1960s (1) in response to the excesses of the consumer society and sprawling industrialization, have fundamentally transformed our relation to the world. They have managed to imprint in our consciousness the idea that human beings are responsible for the general degradation of the planet: the depletion of natural resources, the drying up of water supplies, exploitation of ancestral lands, disappearance of indigenous populations… Millennial oral traditions are becoming extinct, and, along with them, entire segments of human culture and history pass into oblivion.

To refuse oblivion and disappearance in order to reinvent being-in-the-world based on equality, respect, and freedom: this desire captures well the ambition of Agnes Denes, Monika Grzymala, and Cecilia Vicuña. These three artists share an ethical and aesthetical consciousness which guides their approach to the world and to others. Their art is the ephemeral, the passage, and the transmission, inhabited by the living memory of peoples and territories which the artists interweave with the present and which they use to construct the future (2).

In 1968, Agnes Denes (born 1931, Hungary), made her first “eco-logical” intervention in the state of New York, announcing her commitment to environmental questions and human issues. In 1977, near the Niagara Falls, she re-enacted the ritual Rice/Tree/Burial an “allegory of the life cycle” which associates the planting of a rice paddy; chaining together of trees in a sacred forest, formerly an Indian burial ground; filming from the edge of the Niagara Falls; and burying a time capsule addressed to “Homo Futurus” of the year 2979.

Since the 1960s, the poet and artist Cecilia Vicuña (born 1948, Chili) has been creating installations that summon the spirits of the first inhabitants of the Andes. She literally and figuratively weaves together the past and the present. Her Quipus are inspired by a form of “writing” used by Indian tribes, made up of knotted cords, which was banned by the Spanish conquerors. The long, colored cotton cords which make up the immersive installation Quipu Austral (2012–13) are a shimmering, tactile ode to the
communion between man and the cosmos.

Monika Grzymala’s (born 1970, Poland) ephemeral architectural interventions are engendered by physical and imagined lines, made from everyday, fragile materials, such as hand-made paper, scotch tape, magnetic tape…). The artist created The River in 2012 in collaboration with Euraba Papermakers, an art collective of Australian Aboriginal women who use offcuts from the clothing industry established on their ancestral grounds. Water, indispensable in the manufacture of paper, is at the heart of the Goomeroi culture. The River floods the space of the exhibition with thousands of suspended white paper leaves——a river of tears evoking lost spirits.

Following the stream of water in order to grasp the thread of life, this exhibition renews the vital connection between the human and the Earth.

1— Silent Spring by Rachel Louise Carson appeared in 1962. This book was a bestseller which popularized the term “ecology” in the United States.
2— Dedicated to “the Maori people of the forgotten time,” Les Immémoriaux, an ethnographico-poetic novel by Victor Segalen (1878–1919) opens with a memory blank. What might have been but an anecdotal instance of forgetfulness in the recitation of a long litany of ancestors comes to foreshadow the disappearance of a people, forgetful of its own lore and its own customs—of its own past.

to discover the artists