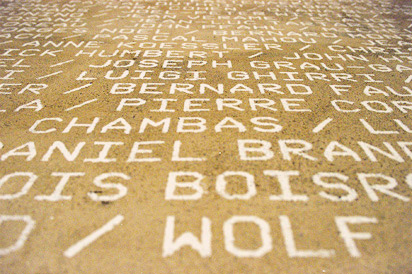 Why include signage among the works in our collection? Simply because reflection conducted in close collaboration with the collective of Swiss graphic artists re-p.org has been, since 2003, an intrinsic part of the FRAC’s artistic project. The signage opposes architecture and the patrimonial aspect of the place. Indoors, signs can be found on the floor, in the form of tactile ground surface indicators which facilitate the orientation of visually impaired visitors. Outside, signs are located on the pigeon tower (the name of the building: 49 Nord 6 Est, and a list of artists featured in the collection), and they help inscribe the edifice in its new role (presentation of contemporary creation) and to situate it in the city according to a new geography and a new temporality.

And so, in Rue des Trinitaires, on the walls of the pigeon tower, one can read a list of names inscribed in whitewashed letters. It is an exhaustive inventory of artists who make up the collection. A massive protective screen veils the reserve storerooms: the sanctuary where artworks are preserved and guarded ad vitam aeternam. Eternity, however, can be no more promised to works than to humans, and it is this paradox that finds its expression on the wall, with its script destined to vanish with the wear of time and due to willful and accidental damage inevitable in a public space. Fading and gradual disappearance bear witness to the FRAC’s desire to remind us of the transitory and reversible nature of its own presence in this patrimonial structure, rich in history.

re-p.org also designed the institution’s visual identity and is responsible for the conception of the FRAC’s publicity and publications.
http://www.re-p.org